To my friends and family:

l’ve journaled some of my experiences and thoughts during my journey to Spain and Russia, and I’m sharing some here. (One day I will figure out how to set up a blog.) No need to reply, but I will be happy to hear from you.

We stood on a busy street in downtown Moscow looking both directions for a zebra. Marina thought that if we walked towards the corner we might find one.

That was my first Russian word, “zeb-rah”. Its meaning was so obvious. It is the painted white bars on the pavement where pedestrians can safely cross. And it was my opportunity to teach Boris a new English word: “crosswalk”. We both practiced our new vocabulary for the rest of the day.

Boris, a self-taught polyglot-engineer-software developer, is both proud and astounded that at age 60+ he has just landed a new job as a programmer with a prestigious firm in a swanky new office building. And he chuckles that in his first week he has completed the project that his predecessor could not complete in a month. “Maybe I need to work slower”. 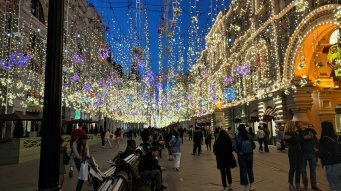 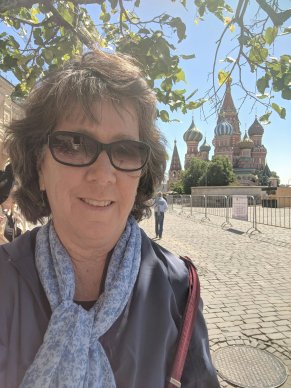 On the morning that Boris and his daughter Marina met me to begin my personal tour of Moscow he could barely contain his enthusiasm. After quick kisses hello, he wanted to first tell me the history of the name of the street we were on, and then tell about the monument in the park, and then….(Marina gently nudged him and suggested that we get started to see the important stuff). Okay, two blocks in the direction of the Kremlin, and then a short detour to pop in to a church that Boris likes for it’s history and architecture. But, the street was barred and he was disappointed. By the end of the day, I had seen so many beautiful churches, buildings, fountains, and parks that I’d forgotten about the missed church.

The Kremlin has museums filled with diamonds and gold, but the secret treasure in Moscow is Boris himself and his deep and wide knowledge of history (from the Tartars, through the Napoleonic wars, the Revolution, and into modern times), art, poetry, and architecture. Of course they showed me St. Basil church, the Kremlin and Red Square, the White church, and Bolshoi Theater. 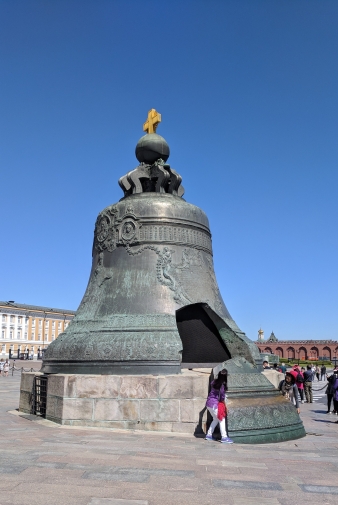 And Boris and Marina retold the history of each, and added their own theories about some. But we also visited the art nouveau house where Gorky lived,

we saw a KGB building where certain residents mysteriously disappeared, and walked past the TASS news agency headquarters. Marina led us to a park and one of her favorite sculptures “Children are the Victims of Adult Vices” by Mihail Chemiakin. It depicts two children playing, and unaware of the dangers lurking around them

represented by 13 grotesque characters representing “violence”, “indifference”, “irresponsible science”, “drug addiction”, and other adult vices. I think it is one of my favorite sculptures, too.

Marina also has a prestigious job, as a recruiter in the human resources department for a company described as “the Russian Google”. She also speaks multiple languages, and she likes to catch her Dad in his rare English grammar error. She learned English first by watching American TV shows, then studied in school. Now she likes to watch American sci-fi and Netflix.

We rode the metro home both days, but I still don’t have the confidence to try Metro by myself. The signs are in Cyrillic, sometimes with the Latin letters in small text beneath. But that is helpful only if you know which platform to stand on and the name of the stop you want (does Kitai-Gorod sound like “kitaygordov”?). There are nine different metro lines and at some stations you can change to a different line. Boris and Marina tried to convince me that I could easily take the metro to the art museum because it is only one stop from my hotel. “You don’t even need to know the names, just get on the right color line”. Well, that was funny because the 3 of us could not agree if the line we rode was “purple” or “red” or “magenta”.

Newlywed bikers on the Bridge of Love in Moscow

In Seville, the chiming of the cathedral bells lost its charm by the second morning’s pre-dawn summons. On my first morning in Moscow, I grumbled when I heard the muffled sound of church bells. That afternoon, I was on the sidewalk in front of my hotel and the little church across the street was ringing its bells at full volume. But after a minute, I saw that there was a collection of bells of various sizes in the tower, and each bell was swinging independently.

Now I heard that it was actually a little melody! It reminded me of a music box, in life-size. The bells were swinging high in the tower, and I could see a little flash of white. There’s a person up there! 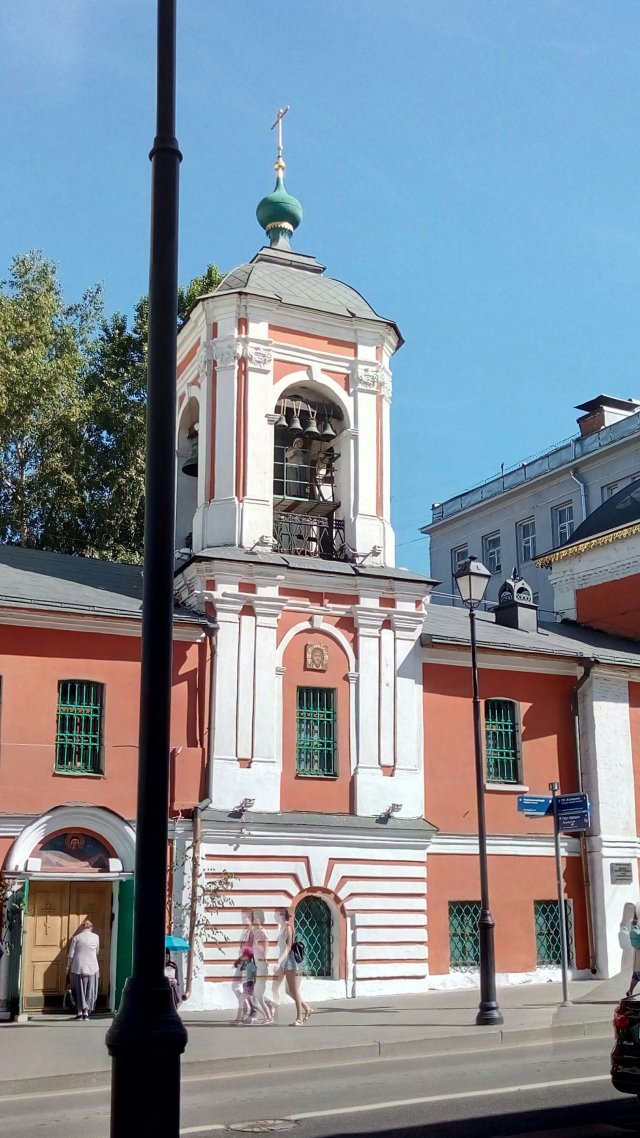 A woman in a peasant dress and scarf was busily pulling ropes and stepping on levers. A tune flowed from the tower, and then repeated again and again. Her hands flashed quickly. Then suddenly, it was over. As the last note faded, the woman hurried down the steps behind the tower and disappeared.

Today and tomorrow I am on my own in Moscow. From my hotel I can walk to the Kremlin, and I will eat at the Georgian restaurant on my block and try the Georgian wine that Marina recommended. Then I board the train to St. Petersburg.

To Boris and Marina, I say the only other Russian word I know: spasiba!

If I Had a Hammer